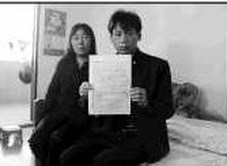 Cheng Yi had been working faithfully in Ka Wai Shoe factory, a Hong Kong invested factory, for 17 years together with her husband. Shoes made by her and her colleagues were exported to places as far as Europe and America.

As early as 1996 workers have been found ill due to the unregulated use of solvents, thinner and glue without any protective equipment. Chen Renbing died in 1996 due to poisoning after working there for a decade. Huang Meixian gave birth to a disabled child after working there for seven years. In 2004 Huang Xiaoyou was diagnosed with leukemia. Cheng Yi started feeling unwell since 2009, with bouts of dizziness and chest tightness. A doctor diagnosed her as having Myelodysplastic Syndrome (pre-leukemia) in Oct 2009, and advised that she could only live for 2 more years. Miraculously her situation seems to have stabilised for now, yet she was less lucky on the compensation front.

Since late 2009 she and her husband have embarked on the tortuous road of occupational disease diagnosis. The factory denied that her disease was occupational and refused to cooperate with the diagnosis process. After repeated complaint and petition, the couples finally forced the factory to provide the necessary documents and received a diagnosis result. To their surprise, the hospital concluded that her disease is not occupational. For two long years they have tried going through all the proper procedure to overturn the result, without success. By now they have exhausted all channel of appeal, and the couples are left with no affirmative diagnosis, no compensation, no job, and a broken family. They were forced to send their son to their relatives since they could no longer pay for his study in Guangdong.